On 16 October 2019, ED Fore met with leaders of faith-based organizations in Washington, D.C., to launch Faith and Positive Change for Children – a Global initiative on Social and Behaviour Change (FPCC), a partnership between UNICEF, Religions for Peace and the Joint Learning Initiative on Faith and Local Communities.

The purpose of the initiative is to put into motion a new way of engaging with Faith leaders and local faith communities.

In his statement for the launch, Imam Mohamed Magid, Co-President, Religions for Peace expressed the privilege he felt working alongside UNICEF as a convening partner for the initiative. “Religions for Peace is the largest inter-faith network in the world and with its country presence and inter-religious councils in numerous countries we take this opportunity to publicly re-commit the support of RfP worldwide to the roll-out of the initiative,” he said.

The FPCC has spent two years generating rigorous evidence, including literature review, mapping of country level work, analysis of resource materials, case study documentation, and consultations with a global advisory group of over 15 global partner faith-based organizations. It is now positioned to further refine and validate its preliminary Theory of Change and comprehensive Principles Paper, both developed to guide more meaningful, equitable and sustainable ways of working with Faith actors towards positive change for children.

Last week, the first of a series of consultations, “Work Rocks” was convened in South Sudan, opened by the country’s Vice President and three Ministers. The series of four-day inter-faith gatherings are being organized in six focal countries in Africa by UNICEF’s Communication for Development Section in collaboration with Civil Society Partnerships (CSP) Unit, Division of Communication and global faith
partners.

“We are calling these kick-off gatherings ‘Work Rocks’ to purposefully seed the idea that this effort is about laying deeper and stronger foundations to ensure sustained partnerships for social and behaviour change from within faith communities,” explained Kerida McDonald, acting Chief of Communication for Development for UNICEF. 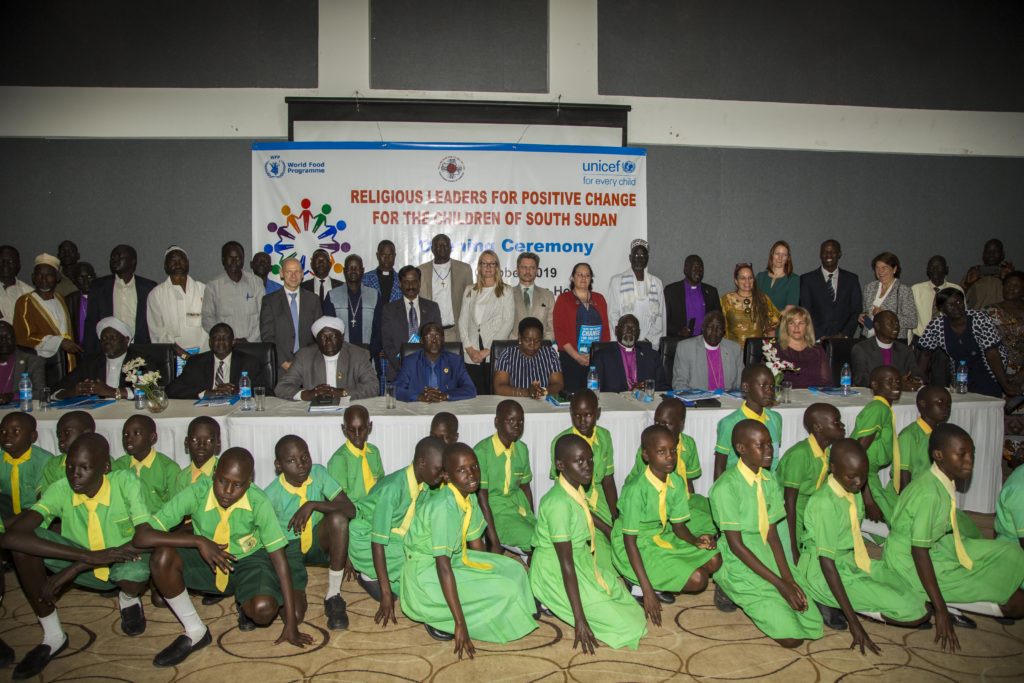 “The aim is to move away from top-down, message-focused, short-term, project mode, sector-siloed and instrumentalist-type engagement with religious leaders which has been characteristic of much of the well-intentioned efforts of country offices to leverage the power of religious leaders in addressing attitudinal and behavioural barriers to achieve programmatic goals.”

At the Global launch of the initiative, hosted by ED Fore, a core representative from the Advisory Group, Sunita Groth, Senior Program Manager of World Vision, lauded the initiative as a unique effort within UN and Development programming to build on lessons learned. “We acknowledge the powerful role that religion can play, for good or for ill,” she said. “We also have learned that we should not impose our own values and ‘development-speak’ on faith leaders and their faith communities.” Ms. Groth went on to stress the value of partnering faith and science to address the issues facing communities.

“We need to come together in true partnership and allow faith leaders to discover the barriers to the change they want to see for families and communities and how to influence these through their own religious texts, grounded in science, and facing the real-life reality of people in their communities,” she said.
Adding, “We have evidence that this type of approach works in influencing concrete change.”
A longitudinal study in Senegal showed 72 per cent of faith leaders and spouses were reported to have stopped hitting or insulting their children, while those believing that faith leaders who abuse children should not be punished dropped from 66 per cent to 15 per cent.

“This is the most important thing I’ve worked on in all my years of faith and development,” said Jean Duff, Executive Director of the Joint Learning Initiative on Faith and Local Communities and UNICEF’s Knowledge partner for the initiative. “The initiative has unprecedented potential for providing a bridge of collaboration across multi-laterals, government and faith organizations; in breaking dependency mindsets through mind and heart dialogue grounded in assets of the community; by re-framing from training to learning, testing and doing; and for creating a strong mechanism for scaling up by joining action across three tiers – global, regional and country level.”

In her closing remarks, ED Fore encouraged partners to continue guiding UNICEF on how the organization needs to remodel its relationships with faith communities for benefit of children. “We count on you all to help us cement the true partnerships we are seeking in order to more effectively address the deep-rooted cultural, social and behavioural issues that undermine even the best efforts of our programmatic work,” she said. “It is fitting that we are staging this global launch of the FPCC initiative during the momentous year of the 30th anniversary of CRC…we take this opportunity to join hands with you today in recommitting our focus and energies to work together more closely and more effectively to ensure the rights and well-being of the world’s most vulnerable children.”

View more about the FPCC

The role of religious institutions in preventing, eradicating, and mitigating violence against children

Executive Summary – FAITH AND FREEDOM: The role of local faith actors in anti-modern slavery and human trafficking – A scoping study